SVE top referee Celina Böhm received a special appointment at the end of the season: the first leg for promotion to the second women’s Bundesliga Hamburger SV – Turbine Potsdam II was under her direction. 1.700 spectators in the sold-out Wolfgang Meyer Stadium don’t happen every day either. In the end, the HSV women won 1-0 (1-0) and were able to take a small lead with them to the second leg in Potsdam.
The game report? Of course – HERE: 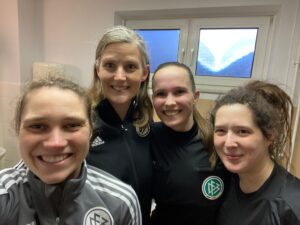 Eintracht top referee Celina Boehm officiated her first international match on February 21, 2022:
The U17 Girls teams from Germany and Denmark met in the Manfred Werner Stadium in Flensburg. At the end it was a clear 5-1 (4-0) for the German team coached by Friedrike Kromp.
The referee team (from left to right): Levke Scholz (Luebeck – 4th official), Sylvia Peters (Luebeck – referee assistant 1), Celina Boehm (referee) and Melina Willig (Benefeld – referee assistant 2) greets them in a happy mood from the dressing room in Flensburg.

Photo shoot of the hosts 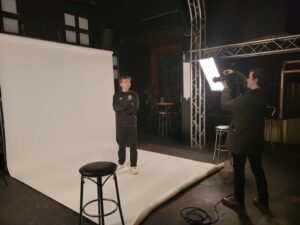 On January 28, 2022, the Lueneburg celebrity photographer Paul Vogt asked the referees of SV Eintracht to the Bardowick event factory for a photo shoot.
Linked to this was the handing out of the new adidas tops, which could immediately be put in the right light.
In the photo, top model and young referee Max Hofmann is being photographed. The pictures will be published shortly on Instagram and here on the homepage.
Not only can they whistle, they’re also really beautiful!

Kilian Sieper, a member of the local Heide-Wendland talent team, got his first appointment in a senior’s division: the match TSV Adendorf II vs. TuS Barskamp II (4:2) in the 11th league. The 17-year-old high school student completed the match with his usual calm. A prominent observer looked at him: Talent team leader and fromer FIFA Referee Assistant Carsten Kadach. 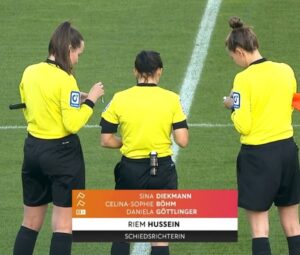 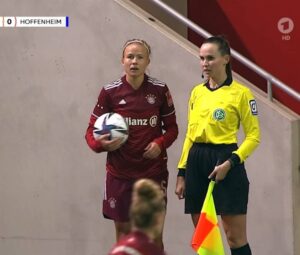 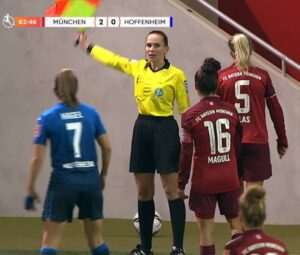 The top match of the women FLYERALARM Bundesliga live on TV… FC Bayern Munich vs. TSG Hoffenheim (3-1) and SV Eintracht with Celina Boehm as assistant referee was also there! At the end of the day, FIFA referee Riem Hussein’s team performed very well. The third in the team was FIFA assistant Sina Diekmann.

After she had already brought her younger brother Max as referee to SV Eintracht and she switched now from TSV Adendorf to the Hasenburg shortly before the deadline: Hanna Marie Hofmann.
The 17-year-old high school student is well-known at the SV Eintracht: with SVE top referee Celina Boehm she was an assistant several times in the women’s regional league and the men’s district league.
Since you don’t have to be a good actor as a referee, her role as “Jolina Bergmann” in the well-known ARD telenovela “Rote Rosen”, which is mainly filmed in Lueneburg, helped her as an exercise (see Landeszeitung from February, 4th 2020 ).
To rise her career she belongs to the referee talent teams of Heide-Wendland (local) and the NFV district of Lüneburg. The NFV district of Lüneburg reports on the course for district talents that took place in Rotenburg on September 18 on its website: talent course for referees in Rotenburg (Wuemme)
And at the end of September it even went up a podium: Hanna passed the women’s association referee course in Barsinghausen with a good result and is now referee in the Lower Saxony women’s “Oberliga” (4th league). Well done!