The tournament brochure is now available on the download page.

…the schedule designers slipped through that there were two versions of start times for the tournament, the schedules on the homepage were adjusted accordingly.
The tournament will open at 3:00 p.m. and the opening game at 3:30 p.m.
Have fun everyone!

SVE top referee Celina Böhm received a special appointment at the end of the season: the first leg for promotion to the second women’s Bundesliga Hamburger SV – Turbine Potsdam II was under her direction. 1.700 spectators in the sold-out Wolfgang Meyer Stadium don’t happen every day either. In the end, the HSV women won 1-0 (1-0) and were able to take a small lead with them to the second leg in Potsdam.
The game report? Of course – HERE: 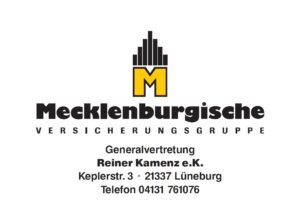 The “Mecklenburgische” insurance company, general agency Reiner Kamenz, is sponsoring the Referee Cup – thank you very much! Anyone who would like to find out more about the offer is welcome to do so on the Mecklenburgische website, just click HERE! 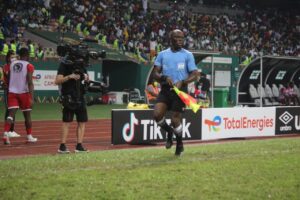 Elvis Noupue in action at the Africa Cup

Elvis Noupue, FIFA referee assistant from Cameroon, was the first of the invited VIPs to announce today (June 10) that he has received his visa. Welcome to the Referee Cup!
First the Referee Cup, then the World Cup: the 38-year-old referee was recently nominated for the World Cup in Qatar. 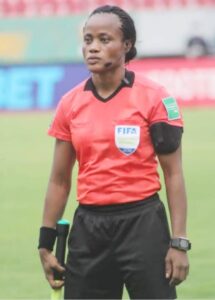 Another colleague was due to come from Cameroon – unfortunately she had to cancel at short notice because the African Football Association send her to a tournament in Morocco: Carine Atezambong Fomo, who was nominated for the U20 Women’s World Cup in Costa Rica in August. But the organizers were quick and pulled Melina Willig from the neighboring Heidekreis out of her hat. The 26-year-old from Benefeld officiates in the women’s 4th league and is an assistant to Eintracht’s top referee Celina Boehm in the second women’s Bundesliga.
An overview of the referees of the 15th Referee Cup can be found HERE.

24 teams are registered, so the group draw was made on June 15th. Linda Kunzelmann (President of SV Eintracht Lueneburg) had a special touch and draw the both finalists from 2019, the Referee Association (SRV) Hannover and the NFV-Kreis Harburg into one group. So these two teams will play the opening match on Saturday at 3:00 p.m.
The schedule can now be found here on the homepage (Tournament –> Results), an overview can be HERE can be downloaded.