Oha – what a guest 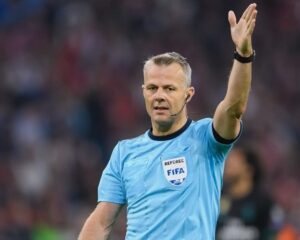 Thanks to Corona, you also have time to look at old player lists from past referee cups. In 1991, the Noord-Oost Twente Referee Association from the Netherlands brought an 18-year-old young referee with him, who later became one of the best referees in the world: Björn Kuipers from Oldenzaal reached the final with his team and was defeated by the Referee Association from the Soviet Union with then current FIFA and 1st division referees in a really high class final with 1:4.
In 1993 the multiple World Cup, Euro, CL, EL referee was again a guest in Lüneburg with the team from the Dutch border region.