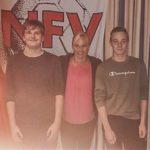 Three Eintracht referees were nominated for the Heide Wendland district selection teams at the 37th Lower Saxony U19 Referee Tournament on the first weekend of January in Goettingen: Kilian Sieper, Lukas Stegen and Jan-Erik Ramm played in one of the two district teams, Oliver Vogt moved in the background the threads of the delegation from the newly built big district.
Highlight at the kick-off event on Friday evening was the podium discussion with the Bundesliga referees Frank Willenborg and Harm Osmers as well as the two German top referees Bibiana Steinhaus and Riem Hussein who are nominated for the Women’s World Cup 2019. With the fourtime world women referee Steinhaus, the two Eintracht youngsters managed a snapshot.